The Feast: an intimate Tempest is brought to life by three actors and a menagerie of handcrafted 2D, 3D and silhouetted puppetry. Below co-creators and co-directors Jessica Thebus and Redmoon co-artistic director Frank Maugeri share their thoughts on the relationship among actors, puppets and audience members. 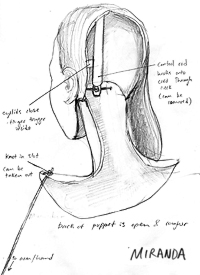 "The story lends itself to a puppeteer/puppet structure right away. There’s the romance of Miranda and Ferdinand, the revenge plot of Alonso and the courtiers, and then the clowns. Atop all of this are Prospero and his minions, making it all happen."
–Jessica Thebus

"The puppeteer is connected to that arm, and as an audience member, you can see how he manipulates those fingers. We're showing you how it works, because we don't want to hide the "magic." The backs of the all the heads are open so you can see the puppeteer's mechanical gestures—everything they have to do to make things move." –Frank Maugeri 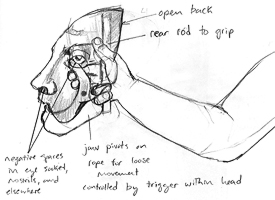 I've not thought about magic in the production as much as I've thought about illusion. Prospero is fundamentally a master of illusion, creating something to disguise something else. We asked ourselves, does he live in a magical world that he has power over, or does he live in a mechanical world that he has made? We decided that he is the engineer. Prospero has served, like Shakespeare himself, as the creator of the world." –Frank Maugeri

Back to The Feast: an intimate Tempest

Programming in the Carl and Marilynn Thoma Theater Upstairs at Chicago Shakespeare is made possible through generous support from Hyatt Hotels Corporation.

design by Frank Maugeri
based on the play by William Shakespeare