A Little Bit of Her-story…

ONE: Catherine of Aragon (played by Adrianna Hicks)

"My name's Catherine of Aragon
Was married 24 years, I’m a paragon
Of royalty, my loyalty is to the Vatican
So if you try to dump me you won’t try that again..."

Isabella of Castile and Ferdinand of Aragon, joint monarchs of Spain

Probably a type of cancer

Her refusal to accept that her marriage was invalid; her faith; her dramatic speech to Henry at the court to judge the annulment of their marriage

Catherine was Regent (whilst Henry fought in France in 1513) during the Battle of Flodden; when James IV of Scotland was killed in the battle she wanted to send his body to Henry as a present…

“I’m that Boleyn girl, and I’m up next
See, I broke England from the Church, yeah I’m that sexy
Why did I lose my head?
Well my sleeves may be green, but my lipstick’s red…”

In the Netherlands and also France; Reformation thinking and debate, French

Lady in waiting to Catherine of Aragon

Headlessness; bringing about the break with the Pope; having a sixth fingernail

Anne was fluent in French as would have acted as a translator during the visit of Emperor Charles V to court in 1522... 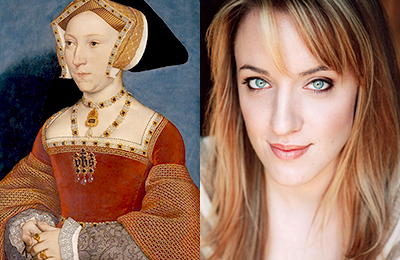 “Jane Seymour, the only one he truly loved
When my son was newly born
I died, but I’m not what I seem
Or am I? Stick around, and you’ll suddenly see more…”

Hemorrhage after the birth of Prince Edward

Being the “only one he ever loved”; having two troublesome brothers who fought over the regency of the young prince after King Henry’s death

While Anne was still alive, Henry sent Jane a gift of money, which she refused, apparently saying there "was no treasure in this world that she valued so much as her honor..."

“Ich bin Anna of Cleves, Ja
When he saw my portrait, he was like “Ja!”
But I didn’t look as good as I did in my pic
Funny how we all discuss that, but never Henry’s little pr-…”

Maria, Duchess of Julich-Berg and John III, Duke of Cleves

Minimal, raised to become a minor Duchess; only spoke German

When Henry first met Anna of Cleves he disguised himself, possibly imagining some sort of romantic reaction. When he kissed her, she is said to have turned away coldly at this hideous stranger molesting her; according to a witness, Lord Russell, he "never saw his highness so marvelously astonished..."

“Prick up your ears, I’m the Katherine who lost her head
For my promiscuity outside of wed-
Lock up your husbands, lock up your sons
K-Howard is here and the fun’s begun…”

Joyce Culpeper and Edmund Howard, son of the Duke of Norfolk

Lady-in-waiting to Anna of Cleves; cousin to Anne Boleyn

Being completely used (and abused) by those with more power

From her arrest on 8 November 1541 to her execution three months later, Catherine stayed under house arrest at Syon House; in late January 1542, an Act was passed in Parliament that made it treason for a woman to become the king’s wife without “plain declaration before of her unchaste life,” meaning Henry could have her killed...

“Five down, I’m the final wife
I saw him to the end of his life
I’m the survivor – Catherine Parr
And I bet you wanna know how I got this far…"

Maud Green and Sir Thomas Parr, both distantly related to the royal family

A daughter (with Thomas Seymour) who died as a baby

Her mother was a lady-in-waiting to Catherine of Aragon; friendly with her daughter Princess Mary