Apparently we can't get enough of this story. 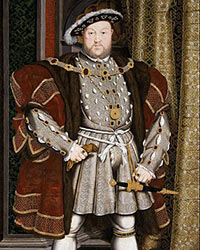 On any given night of Henry's run, CST will be filled with spectators who remember—in waves probably docketed by generation—other spectacles on the same subject, other tellings of the same tale: films ranging from black-and-white classic (The Private Life of Henry VIII) to Oscar-worthy middlebrow (A Man for All Seasons), to simmering potboiler (Anne of a Thousand Days); TV series toggling from PBS-earnest (The Six Wives of Henry VIII) to Showtime-hot (The Tudors). And novels compassing roughly the same spectrum of tastes: Phillipa Gregory's mass-market Boleyn series; Hilary Mantel's Booker-anointed trilogy: Wolf Hall, Bring Up the Bodies, and still to come, The Mirror and the Light.

For centuries, audiences have loved Shakespeare's version too. Until about a hundred years ago, Henry VIII held the stage, with Hamlet, Lear, and a handful of others, as one of Shakespeare's greatest hits. Actors clamored to perform in it, playgoers to witness it once again.

The question that pulls us toward Henry's story is much the same that propels us through the greatest gangster films: what to do with the man who wants everything, and takes a positive pleasure in destroying lives and upending his world to get it? Like many a hypnotic gangster, Henry proffers us a twofold answer: be him, then flee him. Live vicariously through his voraciousness (we all, after all, want everything too), then cut away to distance and disapproval when the consequences of appetite become too dark to endorse.

But Shakespeare, working alongside his much younger but already eminent collaborator John Fletcher, characteristically complicates things. From the start, he makes Henry something of a muddle: intermittently appetitive and assertive (as always), but also whiney, dependent, even dupable. And he places Henry between characters far more formidable, and formidably pitted against each other—Cardinal Wolsey (his ecclesiastical Grand Vizier) and his first wife Katherine—whose ruins he engineers, but whose tragic trajectories generate such heat and light as to outshine, for much of the play, the king's own appetites and aspirations. "These are stars indeed—"remarks one of the play's innumerable onlookers. "And sometimes falling ones," replies another. Wolsey and Katherine fall dazzlingly.

Shakespeare, writing late in his career (there was only one more play to go, followed by three years' silence and an early death), is deeply interested in endings. In fact the play starts with one: a quick kangaroo-court condemnation and execution that will trigger a chain reaction, as we watch the takers-down get taken down in turn by new connivers—who will themselves be felled still later on.

The pattern is compelling in itself, but Shakespeare and Fletcher embed it in something far more sumptuous—a show calculated in every way to be a crowd-pleaser, stuffed with stimuli aimed at every region of the brain: courtroom drama (three tense trial scenes, each differently wound and sprung); sex farce (including a strikingly Hefneresque banquet scene early on); and copious lashings of the kinds of spectacle Renaissance Londoners loved most—parade, procession, pageantry. The play's huge cast and extensive stage directions, by far the most elaborately detailed in anywhere in Shakespeare, make clear that in Henry VIII he and Fletcher were striving for a certain kind of high-budget high-body-count realism. They were offering playgoers, for the cheap price of a ticket (and for as long a run as the show might secure), a scale of spectacle that they might otherwise see only occasionally, on the high street or at court.

From the start, the play's realism flirted fascinatingly with reality itself. Its original title was not the plain-vanilla Henry VIII but the far more provocative All Is True; its first audiences ended up experiencing that truth in extraordinary ways. At the second or third performance, a gun, fired exactly as directed in the script, accidentally set the thatched roof of the Globe theater afire, and quickly brought the house down in flames (though with no harm to audience or actors). When Henry VIII then moved to the indoor Blackfriars theater nearby, its interaction with reality worked another way. The trial of Queen Katherine, in effect the play's centerpiece, had actually taken place, eighty-four years earlier, in the very hall where Shakespeare's audience now witnessed its reenactment.

But for early audiences, the historical truth that probably hit closest to home was the christening, in the play's last scene, of the infant who would later, after much turmoil, be crowned Queen Elizabeth. At the play's premiere, in 1613, she had been dead for almost exactly ten years, after a prodigious forty-five-year reign. For any audience member older than twenty-one she would have been a vivid presence in living memory, a phenomenal self-performer in her own right (and in full and fabulous costume), and the architect of the unprecedented English epoch—all that exploration, conquest, wealth, confidence, and drama onstage and off—that the playgoers themselves now inhabited. In the gorgeous, gleaming, uncannily on-point prophecies spoken by the Archbishop of Canterbury over the infant future Queen, the audience would have heard, and perhaps in large measure assented to, a luminous affirmation of the forces that had shaped their own lives. They were witnessing the genesis of their whole proliferant and prolific culture.

They also, thanks to Shakespeare's and Fletcher's ingenuity, saw much more. So do we. Like those early audiences, we know the future that the characters on stage do not: the execution of Elizabeth's mother less than three years after her baby's birth; the four wives (and one more spousal decapitation) still to come; the devastating, deadly religious conflicts that will arise out of the machinations we've just witnessed; the vicissitudes of fortune that will nearly destroy Elizabeth before they make her queen. In any prophecy as roseate as the Archbishop's, all cannot be true because truth is only partial; so much must be left out.

Shakespeare and Fletcher structure All Is True in such a way as to make its title less an assured assertion than an open question. It's mainly true that Henry, Wolsey and the rest made these choices and these moves with these consequences. But it's also true, in ways the authors insistently emphasize, that untruths—lies about their enemies, and even about their allies—are the Realpolitik medium they work in, breathe, and live by. Nor, it turns out, is truth itself rock-solid. As the play proceeds, judgment proves as malleable as fact: a "bold bad man" can become, even in the eyes of his most ardent enemy, a figure worthy of admiration and honor. Characters change their minds constantly, about themselves (listen to Wolsey's late great speeches) and about others (listen to Katherine's).

You'll likely change yours often too. In Henry VIII, all is just true enough to crack the question of truth wide open.

Stuart Sherman, Associate Professor of English at Fordham University, is a specialist in eighteenth-century literature and the author of Telling Time: Clocks, Diaries and English Diurnal Form, 1660–1785.

Back to Henry VIII

Henry VIII was presented in the Jentes Family Auditorium.