A Conversation With Two Directors 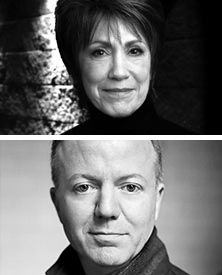 Barbara Gaines: Chris, as an Englishman how were you first exposed to Shakespeare?

Christopher Luscombe: I was hooked from a very early age because it was theater—and I was theater-crazy. I grew up just south of London and I started going into the city to see shows on my own. Then because of a wonderful English teacher I started specializing in English. As a teenager I studied Henry V at school, and in a way I fell in love with Shakespeare through this play.

BG: Tell us how you see the character of Henry V.

CL: I want him to be appealing and attractive, a character whom the audience wants to spend an evening with. I have seen it played where he's cold-hearted and manipulative, which I personally don't think is true to Shakespeare, and certainly isn't true to his source material. He's a brilliant leader, so he has to have a measure of ruthlessness about him, but I also want him to have charm and wit. He is, after all, the product of the sentimental education he had at the hands of Falstaff, probably the best company of any man you'll ever meet. I think you've got to see why people are prepared to follow him into battle. I don't want to duck the idea that there's a dark side. He thinks very deeply and I want to honor that, too. It's a play about integrity, about analyzing one's actions, about doing what you believe is the right thing, about being true to oneself and being true to the people around you. I hope that it's a complex moral argument but that it has a clarity about it. I find Henry's journey to be very moving. I see him as a prototype for Hamlet.

BG: And the play's vision of war—how have you come to see that?

CL: I think this play debates the validity of war, then and in our own time, too. Henry needs to know that his cause is just in taking his country to war. He reiterates the fact that there's a massive price to be paid for war and that it's going to wreak havoc amongst the whole of society. Is he doing the right thing? Has he got "right" on his side? In his terms, it's a lot to do with whether he feels that he has God's backing.

BG: You're thinking about the night before the battle of Agincourt when Henry goes and talks to his troops.

CL: I don't think I realized until I was working with these actors just how insurmountable the odds were. The situation is very bleak. They're facing their annihilations the next day. It reminds me very much of the first World War, which was fought on the same territory—one hundred years ago this year, in fact. I think this is significant, and in a way the production is a commemoration of that. Those young men, too, were going to almost certain death when they climbed out of their trenches.

BG: How do you see the space of the Courtyard Theater informing this play?

CL: The opening Chorus tells us that we're watching a play. We're not watching a slice of life; we're putting on a theatrical representation of the Battle of Agincourt. It's a challenge, but it's a challenge that Shakespeare is very conscious of. I think this theater lends itself to it beautifully, in fact, because it's such a theatrical space—and of course it relates closely to the "Wooden O" of Shakespeare's own Globe. If this were a proscenium arch theater, then we might as well pretend we're on the battlefield at Agincourt. But here, we're looking at actors performing on a platform—and using our imagination just as the Chorus implores us to do. The Chorus gives this entire play a sense of mischievousness. It's the writings of a real man of theater who is concerned about how he’s going to tell this story within the limitations of the building that he knows so well. It feels very personal to Shakespeare. I would like to think that it reflects his personality. This is a very mature piece of writing, an expression of the playwright's mature, ironic, witty, human view of the world. It's about life and death and war and marriage. It's epic and it's intimate.

BG: You've mentioned the Chorus, and I know that you have some very specific plans for that role.

CL: I think that it's one of the most distinctive things about the play. Each act begins with a famous speech delivered by the Chorus—some of the best writing in the play. It's marvelous, descriptive verse, painting the pictures, conjuring up these scenes we are about to watch. I thought it would be fun to distribute those speeches among the company. I like the fact that you might be playing a scene and just turn to the audience and tell us what's going to happen next. Really talk to us—and of course this space lends itself brilliantly to that.

BG: And we need the audience in that equation.

CL: Yes! "We need you to use your imagination and make this work. Can you help us on this?" I think it's an exciting way to start a play.

BG: What have you discovered in working with Chicago actors for the first time?

CL: I'm amazed at the skill that has developed over the twenty-five years of Chicago Shakespeare. They couldn't be doing this if they were actors who simply happened to be in Chicago and doing a lot of shows. They're actors who are very well versed in Shakespeare (pun intended), and I think that there's no substitute for that. They come with an experience and a love of the material. There’s a strength and depth. It feels like a true ensemble.

Back to Henry V

Henry V is presented in the Jentes Family Auditorium.