Chicago—January 20, 2014—Chicago Shakespeare Theater (CST) announces casting for Short Shakespeare! A Midsummer Night’s Dream, a 75-minute abridged production of William Shakespeare’s whimsical comedy of misplaced young passions and magical mischief. This new adaptation by Jeff Award-winning director David H. Bell provides a quality, family-friendly introduction to Shakespeare with special opportunities for audiences to interact with the actors at every performance. In addition to public performances each Saturday, this production will welcome 1,000 students each day to the Theater’s home on Navy Pier during its five-week run in the Courtyard Theater, followed by a tour to schools across the Midwest. Short Shakespeare! A Midsummer Night’s Dream will be performed for the public Saturdays at 11:00 a.m. from February 22 to March 22 in CST’s Courtyard Theater. After each performance, the actors remain on stage for a brief question-and-answer session, before joining the audience in the Lobby for one-on-one conversations and photo opportunities.

A magical forest filled with a host of some of Shakespeare’s most comedic characters make A Midsummer Night’s Dream one of his best-loved plays. When young lovers cross with mischievous sprites in the freedom of the woods, a series of mishaps occur and nothing is what it seems. When a troupe of fumbling actors is added to the midst, chaos breaks loose.

Director David H. Bell’s abridgment of Shakespeare’s perennial favorite has been created with young audiences in mind and is a delightful encounter with Shakespeare for anyone. Bell has re-imagined the rag-tag Mechanicals, Athenian craftsmen who moonlight as amateur actors, as a group of students putting together a play. This troupe of students both relates directly to young audience members and embodies the joy of young people experiencing theater for the first time. A clever set by Scenic Designer Scott Davis uses inventive theatrical techniques to populate the rich world of an enchanted forest. Costumes by Melissa Torchia evoke the Edwardian period through a modern lens of contemporary fashion—pairing, for example, a period jacket with skinny jeans. Above all, the production speaks directly to today’s teens by engaging vibrant imaginations and embracing the universal joys and follies of love.

Following the public and student performances in the Theater at Navy Pier, the abridgment will launch into a tour to urban, suburban and rural schools across the Midwest for an additional five weeks. With a crew of eight and a 20 foot-long box truck, the production’s theater magic will transform each venue with high caliber staging and design, giving students the experience of a fully realized professional performance. This Short Shakespeare! series of student-focused abridged versions of Shakespeare is an essential component of CST’s celebrated Team Shakespeare education program. Chicago Shakespeare offers exclusive access to its celebrated productions by removing financial barriers to participation with subsidized tickets for school groups. At the heart of this comprehensive effort is a conviction that Shakespeare’s plays are best appreciated when they are experienced as the playwright intended: performed live for a widely diverse audience.

Audiences of Short Shakespeare! A Midsummer Night’s Dream at CST and in schools around the Midwest will be treated to a stellar cast of actors, many of whom have performed on Chicago Shakespeare stages in recent seasons. Lanise Antoine Shelley appears as the fairy queen Titania, doubling as Hippolyta, while Eric Parks performs the proud Oberon, as well as Theseus. The young lovers are brought to life by Tiffany Yvonne Cox as Hermia and Cristina Panfilio as Helena, with Ryan Hallahan as Demetrius and Nate Burger as Lysander, the bumbling suitors. Steven Lee Johnson performs the role of the mischievous sprite Puck. Alex Weisman performs Bottom, the eager dramatist who is transformed into an ass and becomes the object of Titania’s affections. Don Forston plays both Egeus and Quince of the Mechanicals. Playing the rest of the gang of the Mechanicals are Wesley Daniel (Flute/Thisbe), Justin Cornwell (Starveling/Fairy), Max Fabian (Snout/Fairy) and Michael Finley (Snug/Fairy).

For a complete listing and bios of the company and creative team, visit www.chicagoshakes.com/ssdream.

Chicago Shakespeare Theater’s Short Shakespeare! A Midsummer Night’s Dream will be performed for the public on Saturdays at 11:00 a.m. from February 22 through March 22, 2014 in CST’s Courtyard Theater. Tickets are on sale now for $16–$20 with special discounts available for groups of 10 or more. All patrons receive a 40% discount on guaranteed parking in Navy Pier garages. For more information or to purchase tickets, contact Chicago Shakespeare Theater’s Box Office at 312.595.5600 or visit the Theater’s website at www.chicagoshakes.com.

CST strives to make its facility and performances accessible to all patrons through its Access Shakespeare programs, including ASL Duo-interpreted for audience members with hearing impairments, and Audio-described performances for patrons with visual impairments. Learn more about Access programs for Short Shakespeare! A Midsummer Night’s Dream here.

Chicago Shakespeare Theater (CST) believes that Shakespeare speaks to everyone. A global theatrical force, CST is known for vibrant productions that reflect Shakespeare’s genius for storytelling, language and empathy for the human condition. CST has evolved into a dynamic company, producing award-winning plays at their home on Navy Pier, throughout Chicago’s schools and neighborhoods, and on stages around the world. Chicago Shakespeare serves as a partner in literacy to Chicago Public Schools, working alongside English teachers to help struggling readers connect with Shakespeare in the classroom, and bringing his text to life on stage for 40,000 students every year. And each summer, 17,000 families and audience members of all ages welcome the free Chicago Shakespeare in the Parks into their neighborhoods across the far north, west and south sides of the city. Reflecting the global city of their Chicago home, CST is the leading producer of international work in Chicago and has toured their own plays abroad to Africa, Asia, Australia and Europe.

The Theater’s tradition of excellence and civic leadership has been honored with numerous national and international awards, including the Regional Theater Tony Award®, three Laurence Olivier Awards, and seventy-seven total Joseph Jefferson Awards. CST was the 2012 recipient of the Folger Shakespeare Library’s national Shakespeare Steward Award for innovative teaching of Shakespeare in American classrooms. Among its many international engagements, CST participated in the Royal Shakespeare Company’s 2006 Complete Works Festival and was selected to represent North America at the Globe to Globe festival as part of London’s 2012 Cultural Olympiad. 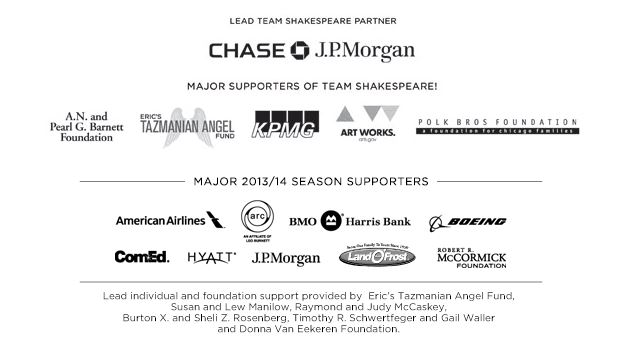