Summer in Neverland begins next week

Flying into the Courtyard Theater this summer is J.M. Barrie’s beloved tale about the boy who wouldn’t grow up, Peter Pan, A Musical Adventure. With critically acclaimed director and choreographer Amber Mak heading the production, this 75-minute version features music by George Stiles and lyrics by Anthony Drewe—the award-winning duo behind the smash Broadway hit Mary Poppins. This marks Mak’s directorial debut at Chicago Shakespeare, but she’s no newcomer here, having appeared onstage as a Munchkin in the 2001 and 2002 The Wizard of Oz. In the years since, she has garnered accolades for her direction and choreography across Chicago. Discussing the production, Mak explained she loves what this version of the classic tale brings: a Wendy as strong and central a character as Peter Pan, exciting new music, and an opportunity to encourage imagination. "Kids have the most amazing superpower of taking the mundane and making it fantastical," Mak marvels, adding that the show’s design is inspired by this whimsical, playful "superpower." 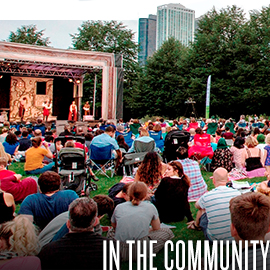 Continuing the Theater’s direct service to its community, Chicago Shakespeare Theater, the City of Chicago, Chicago Park District, and Boeing partner once again to present the annual citywide summer tradition, Chicago Shakespeare in the Parks. Made possible by production sponsor BMO Harris Bank, twenty-five free performances of Shakespeare’s timeless classic A Midsummer Night’s Dream, staged by Artistic Director Barbara Gaines, will play in eighteen neighborhood parks across the city. Gaines has always treasured the Chicago Shakespeare in the Parks tour, which carries on the tradition of free Shakespeare that she established in the early years of the Theater. Now, for the first time since the tour began in 2012, she will direct not only the beloved Chicago summer production, but also her first Midsummer. The tour runs July 25–August 26, and includes six ASL-interpreted performances, an audio-described performance, as well as two new sites—Ogden Park and Calumet Park. 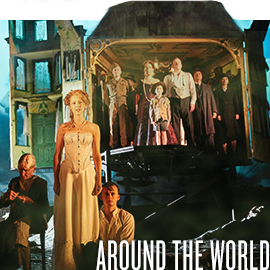 Director of Netflix's The Crown at CST

During a rehearsal break for an upcoming play, director/executive producer of The Crown Stephen Daldry stepped away with actor Claire Foy to film a message for Chicago Shakespeare Theater’s Spirit of Shakespeare Artistic Honoree, John Lithgow. Played during the Theater’s annual Gala earlier this month, the video features Daldry (who directed Lithgow as Churchill to Foy’s Queen Elizabeth II) presenting the award to his American colleague from across the Atlantic. Beyond TV, Daldry’s spectacular career includes Oscar-nominated films like The Reader, The Hours, Billy Elliot, and Extremely Loud and Incredibly Close, along with Tony Award-winning stage productions like Billy Elliot–The Musical. This winter, Daldry comes to Chicago to stage his critically acclaimed production of JB Priestley’s classic thriller An Inspector Calls, originally presented at the National Theatre of Great Britain. This limited WorldStage engagement will run in The Yard at Chicago Shakespeare, February 19–March 10, 2019.

See More of An Inspector Calls > 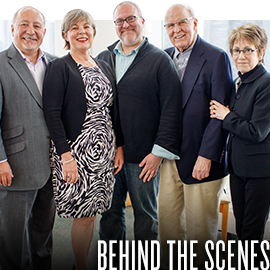 In May, the Theater gathered to present Costume Shop Manager Ryan Magnuson with the sixteenth annual Hurckes Award. Created by Dick Hurckes, a founding member of the Theater’s Board of Directors, and his wife Lou, the Hurckes Award supports the work and ongoing professional development of the artisans and technicians who create the worlds on our stages, yet rarely receive public recognition. Magnuson began at the Theater as a stitcher in 2002 and now helms the costume shop in executing each designer’s vision. "The construction skills he developed in his years of work with us as a stitcher, his keen artistic eye, and his advocacy for his work have built him a well-deserved reputation in the design community as the greatest of partners," explained Director of Production Chris Plevin. "He asks difficult questions with an eye to provoking conversation, while balancing the interests of his designers, his team, and our directors throughout the inevitabilities of blood, swordplay, water, and all manner of challenges. Perhaps most importantly, he does so with a sense of humor." The costume designers he has worked with were equally effusive, and Virgil C. Johnson (Gypsy, Amadeus, Henry IV) exclaimed "I’ve never been happier working in the theater than when he is by my side."

Highlights from the Event >