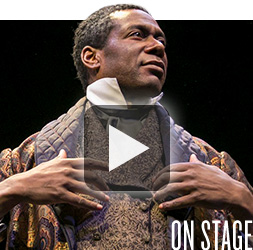 Uncovering the story of a forgotten theatrical pioneer

On Wednesday evening, Red Velvet audience members received a special treat, as director Gary Griffin and London-based playwright Lolita Chakrabarti joined Director of Education and Communications Marilyn Halperin on stage for a post-show discussion. For many, this play is an introduction to the major nineteenth-century Shakespearean actor, Ira Aldridge, the first black actor to play Othello on London’s West End. Though controversy surrounded that two-night run in Covent Garden, during his lifetime, Aldridge garnered tremendous fame throughout Europe for his powerful performance style. Sadly, his story has slipped into the shadows over time. Stratford Festival favorite Dion Johnstone, who portrays Aldridge, shared, “It’s a privilege to be able to bring Ira’s voice to life, and I hope this production helps elevate him to the status he deserves.” Red Velvet plays in CST’s Courtyard Theater through January 21. 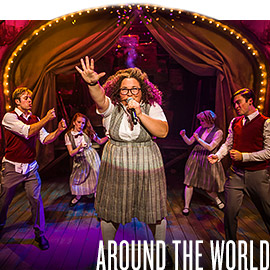 CST’s New Works across the US

2018 is shaping up to be a landmark year for CST-commissioned work at theaters across America. After Ride the Cyclone’s acclaimed run in Chicago and New York premiere at the prestigious MCC Theater, it will now make its West Coast debut at the 5th Avenue Theatre in Seattle. Also in 2018, the Everyman Theatre in Baltimore will present The Book of Joseph, the stirring, real-life tale of Joseph A. Hollander and his family that enjoyed its world premiere at Chicago Shakespeare earlier this year under the direction of Barbara Gaines. Our new work development program is helmed by CST Creative Producer Rick Boynton, whose tenure has focused on artistic planning and production, as well as the development of new plays, musicals and adaptations for the Theater. Boynton recently met with The Daily North Shore to discuss his dynamic role as a creative force in Chicago. 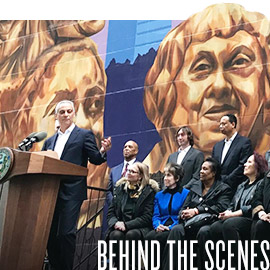 Chicago Shakespeare Artistic Director and Founder Barbara Gaines will be featured among twenty prominent Chicago women in a mural on the Chicago Cultural Center’s facade, between Washington and Randolph Streets. When asked about his inspiration for the piece, artist Kerry James Marshall shared, “My idea was to make a forest Mt. Rushmore acknowledging the contribution of women who’ve worked to shape the cultural landscape of the city, past, and present.” Other high-profile women highlighted in Marshall’s 132-foot by 100-foot mural include media mogul Oprah Winfrey and Pulitzer Prize-recipient and former Illinois Poet Laureate Gwendolyn Brooks. The mural also features Ruth Page, celebrated dancer, choreographer, and founder of the Ruth Page Center for the Arts, which was home to CST from 1987 to 1999. 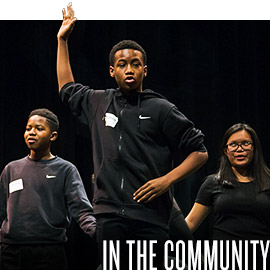 Students across Chicago ‘Slam’ with Shakespeare

On December 11, CST will host hundreds of students from across the city and suburbs for the Chicago Shakespeare Slam Final Bout. The evening's performances mark the culmination of countless hours of rehearsal time, Saturday workshops and preliminary competitions. A select group of teams will advance to the Finals—performing to a theater filled with their Chicago Shakespeare Slam peers gathered in support. The rock concert atmosphere of the night will be fueled by a DJ and emcees, all ignited by the exuberance of the students, making the words of Shakespeare their own. This one-of-a-kind program is new in 2017, and reaches schools across the region from the Belmont-Cragin neighborhood on the city’s northwest side to the South Chicago neighborhood, and from Aurora to Waukegan in the suburbs.