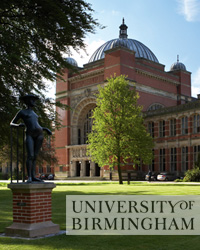 Inaugurating this international partnership last year, CST Director of Education Marilyn Halperin was in residence at the Shakespeare Institute for a week dedicated to the exploration of creative approaches to the scholarly study of Shakespeare. Ms. Halperin worked closely with Professor Michael Dobson, Director of the Shakespeare Institute, and Dr. Jacquelyn Bessell, a foremost expert on the study and performance of Shakespeare. A nationally regarded leader in the field of arts education, Ms. Halperin guides the Theater’s youth-engagement initiatives. Her twenty-one-year tenure as the chief architect and head administrator of CST’s transformational programs was honored by the Folger Shakespeare Library in Washington DC, with the prestigious Shakespeare Steward Award in 2012.

The creative exchange between CST and the Shakespeare Institute continues this summer as the Theater welcomes its first-ever University of Birmingham graduate, Alana Tomlin, who is pursuing an internship with Ms. Halperin and CST’s Education Department. Ms. Tomlin will gain direct experience in the drama-based literacy model pioneered at Chicago Shakespeare, which breaks open Shakespeare’s language for high school students—some of the most challenging text in the English curriculum—by employing the same techniques the Theater’s actors and directors use when bringing his works to life onstage.

Photo courtesy of the University of Birmingham.

Join the Bard Circle, CST’S premier giving society, and your gift will be doubled by the Bard Circle Challenge Grant! Gain access to VIP ticketing, interval services, and behind-the-scenes events!

Chicago Shakespeare
in the Parks
The Comedy of Errors
July 26–August 25, 2013