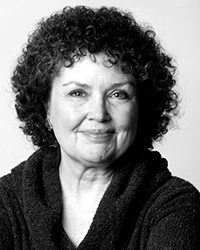 When she began the rehearsal process with her cast, Director Penny Metropulos sat down with Director of Education Marilyn Halperin to talk about her production of Cyrano de Bergerac.

Penny, we’re delighted to be welcoming you back to Chicago Shakespeare—and, with you, Harry Groener, who played your George III when you directed The Madness of George III here in 2011.

At first rehearsal when the entire CST staff and Cyrano cast gathers together in the room, I was so moved by listening to not only who everybody was but by what everybody does here—including our ‘wig knotters,’ who are constructing the 40 wigs for this production. Think about it. This is a centuries-old craft we’re still utilizing— and this theater fosters that level of art-making. I can’t imagine any director not being overwhelmingly grateful for being asked to work on Cyrano de Bergerac. But it’s a very large show, and it takes a theater like Chicago Shakespeare to be able to produce a play like this.

Rostand’s decision to write this particular story where and when he did was surprising, wasn’t it? What made it so?

Rostand wrote this play when he was twenty-nine years old. He wrote it in the late nineteenth century, when naturalism and realism absorbed the great playwriters of the time, notably, Ibsen, Shaw and Strindberg, among so many others. The writers of the day were saying, Let’s look at the underbelly because things are not pretty. Things are not romantic. They are gritty and nasty and ugly. But none of us can do that twenty-four hours a day, every day of our lives. We need to be reminded of grace and beauty, and that’s what Rostand does.

You chose to work with the translation by Anthony Burgess. Talk to us about Burgess’s ‘presence’ in this piece.

Anthony Burgess is best known for his Clockwork Orange, and some of our audience will know him, too, for his Shakespeare scholarship. Working on this man’s translation and adaptation, you come to understand how his own genius met the genius of Rostand and together created something quite extraordinary. The fact that Burgess wrote two different translations of this same play over the years is indicative of just how rich the play is and how it affected him, as a writer and a poet. We think we know the play, but then when it is revealed in its entirety you see that it’s much deeper, much richer. Is that the reason for its lasting power—and why audiences for well over a century have embraced it? It’s interesting to me that the story starts in a theater, because Cyrano’s onstage audience enters the hall looking for the same thing we all look for when we go to the theater. Peter Brook calls it having this ‘interest.’ Interests vary. Some go to the theater to see a star. Some go because they want to be seen. Some people go because they want to say they’ve been to the theater. Some go because they’ve read about the production somewhere. Some people go to the theater because they need their hearts filled. They want to laugh, they need to forget. This is our audience and this is the audience that walks into that imaginary onstage theater to see a famous actor of their day. The real theater, though, occurs when Cyrano enters. When he walks in the door, the truth walks in—and when truth walks in the door, it’s thrilling, it’s witty, it’s brilliantly spoken, and it goes right to the heart of the matter. That’s what that audience was looking for and they got it. I think a play like Cyrano de Bergerac meets that need so beautifully, and that’s one of the reasons I love it. I think we need it to lighten our dark world in a joyful way.

What have you come to appreciate about this character at his core?

To me, one of the definitions of panache is the joy of the pursuit of the ideal. To me, that is the reason that this story is not a tragedy, though its hero dies. That sense of joy in his pursuit of the ideal is present all the way to the moment of his death. When we talk about seeking the ideal, it is the essence of who we are as human beings. It’s the most serious question we can ask ourselves. It is what defines our character and defines our life. Do I, or any of us, do this daily? No, of course not, but that’s the reason we have and need heroes in literature. To help remind us. Cyrano says, ‘I cannot be successful without excess.’ He has this tenacious desire to not be distracted from the ideals that he’s pursuing. That’s what a real hero is, right? Someone relentlessly undistracted by this pursuit. But Cyrano is also a human being. What is he distracted by? His vanity—that he believes he can never be truly loved because of the way he looks. He is human, and that’s why we are so moved by him. ‘These are my enemies,’ he says as he dies: vanity, pride, stupidity, ignorance. He has fought his enemies on the outside, and his enemies on the inside. I think we all have a part of Cyrano in us.

You said that watching the recent coverage of the 1963 March on Washington resonated profoundly with you as you were in rehearsal. Can you talk about the connection in your mind?

Martin Luther King, Jr. didn’t know at the beginning who would join him, that it would be students first in Birmingham and soon throughout the country who entered the civil rights movement. Young people hold the belief that there is something better. Cyrano holds in his mature, experienced self, this seventeen-year-old idealism. In one of her essays, Annie Dillard talks about ‘the long thought’ and how we have strayed from our ability to have the long thought because we’re so distracted by our lives. Someone like Martin Luther King, Jr. or like Cyrano has the long thought.

Back to Cyrano de Bergerac

Cyrano de Bergerac was presented in the Jentes Family Auditorium.