Highly Recommended… This cast is dynamite! 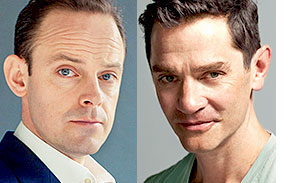 In this remarkable true story from Oscar Award-winning writer David Seidler, Great Britain’s reluctant monarch finds a surprising ally in an unexpected place. A generation before the royal family we know today, Queen Elizabeth’s father George VI would ascend the throne, a most unlikely king thrust into the spotlight after his brother David gives up the crown to marry American divorcée Wallis Simpson. Struggling with a chronic stammer, Bertie (as his family knew him) must speak to his nation as it stands on the brink of World War II. Enter an unconventional speech therapist named Lionel Logue, whose methods are anything but common. With Logue’s help Bertie finds his voice, and forever changes the course of history. Portraying these two extraordinary men are Harry Hadden-Paton (Broadway’s My Fair Lady, Downton Abbey, The Crown) and James Frain (The Tudors, True Blood, The White Queen), who lead a stellar cast that brings Seidler’s drama to life on stage—as he first imagined it—in this not-to-be missed North American Premiere.

Gallery: In Rehearsal: The King's Speech

Gallery: Behind the Scenes: The King's Speech

Audio: Kevin Gudahl talks about the history of The King’s Speech as a play

Audio: Elizabeth Ledo and Kevin Gudahl talk about the choreography of stage movement

Audio: Kevin Gudahl talks about the importance of building a relationship with the audience

"Full of heart and honesty, it has a little something for everyone…carries this historical tale immediately into today," says Picture This Post.
Read More

A brief introduction to the story of The King’s Speech, including the historical origins, royal family ties, and the influence of new media.
Read More

Michael Wilson shares his insight into this remarkable true story, and the unique point in history during which it is set.
Read More

Stuart Sherman of Fordham University on aspirational storytelling in theater, the influence of media, and the nature of theatrical transformation.
Read More

David Seidler shares the special resonance he has always felt with George VI, and how The King's Speech was his dream project.
Read More

This free series of programs offers lectures and talkbacks on ideas embodied in the play as well as opportunities to meet the cast.
Read More

CST looks to provide the best possible seats and service to make our facilities and performances accessible to all patrons.
Read More