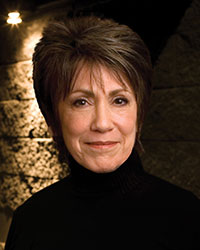 What is the nature of the border between truth and lies? It is permeable and blurred because it is planted thick with rumour, confabulation, misunderstandings and twisted tales. Truth can break the gates down, truth can howl in the street; unless truth is pleasing, personable and easy to like, she is condemned to stay whimpering at the back door.
—from Hilary Mantel’s  Bring Up the Bodies, quoted by Barbara Gaines at first rehearsal

As you’ve entered the world of this play over the past months, what has surprised you about Henry VIII?

BG: First, he was an extraordinary young man. He loved learning, and studied with some of the great scholars of England. He was a master musician; he spoke many languages. He was a poet, a composer, a gardener. He was his own architect.  And he was charismatic. He had limitless energy. Whether jousting or dancing, no one did it better than he.

I was a teenager when I learned Queen Katherine’s monologue for my acting teacher, who was understandably surprised by this choice! Returning to the play as adult, I realize how I had underestimated its psychological layers. Before, I saw the tyrant; now, I also see the tragedy of a life with so much promise, this great soul sabotaged by his own actions and his inability, or unwillingness, to ever excavate his interior landscape. Ultimately, he destroys himself. But this play focuses on an earlier period in his reign when he is still married to Katherine, and when he meets and eventually marries the second of his six wives, Anne Boleyn.

How have you come to understand his first marriage to Katherine?

BG: I think in the beginning of their marriage they were happy. They were both so young. Katherine was a brilliant woman who had many of the same qualities and interests as he.  In this play, the two of them appear together in just one scene before he meets Anne, and what we see is a respect and friendship between them, but no longer a great love affair.

And then he meets Anne Boleyn.

BG: Yes. I think she was the great love of his life. But what interests me in this play is what makes someone who is so obsessed with someone then begin a massive marketing campaign against her--and ultimately decapitate her? That’s a tremendous arc of a life and a love.

What do you make of Shakespeare and Fletcher’s original title for this play, All Is True?

BG: In my mind, “All Is True” is a completely ironic title. Certainly Katherine’s truth is very different from Henry’s, as is Anne’s. All is true in that people’s perspectives are always different--and nothing is true. It depends who you are and where you stand. That’s where empathy comes in—and there’s very little of it in this play. To me, this is what this story is about. Henry VIII: All Is True. And nothing is true. People’s perspectives are inevitably warped by their own agendas.

From a canon with practically no stage directions comes this late play of Shakespeare’s that’s full of them! What do you plan to do with that?

BG: I think he and Fletcher recognized what Cecil B. DeMille discovered three hundred years later—that there’s no such thing as too much excess when it comes to entertainment! It’s a play filled with pageantry and processionals--a hundred people onstage cheering Anne Boleyn, a hundred people onstage hating Buckingham. Well, first of all, we don’t have the money to do that. Second of all, the pageantry didn’t bring out the soul of the play. All of us have been obsessed by someone. All of us have been hurt by a lover rejecting us. Many of us have ambitions that will not be fulfilled. And so I realized that I couldn’t get to the intimate psychological part of this journey if I was looking at a hundred other people onstage. We had to simplify it all in order to focus upon what truly matters: the inception of this tyrannical regime.  And then at the play’s end we arrive at the birth of the future Queen Elizabeth. From this profoundly damaged tyranny comes something quite miraculous.

We haven’t spoken yet of the Lord Cardinal Wolsey. Help us understand his character in light of this story.

BG: When Henry VIII’s father died, the son was just a young man, and he had no interest dealing with the “business” of monarchy. Wolsey, who was brilliant, dealt with all of that. The nobles detest the man who keeps them all at arm’s length from the King. At the time of this story, Wolsey is probably the richest man in the country, and his secret ambition is to become the Pope.

And  Katherine? Is she someone innocently caught up in the course of these events?

BG: Here’s a question. If someone you love very much stops loving you, are you going to hold on to that person with everything you have? Or do you say what Katherine does not—that I can only be with someone who loves me? So many people died because she held on to Henry. A church was torn apart, innocent people were slandered; many, many people killed. In a way, the loss of love caused these cataclysmic events.

Any final thoughts you want to leave us with?

BG: What interests me is how this phenomenally charismatic human being loses his humanity and becomes a tyrant with no regard and no mercy--for law, for women, for human foible. He had so much potential to evolve into a great soul. But his proclivity toward cruelty reined in any capacity for introspection and mercy. And yet at his death, the entire country loved and mourned him deeply. So it’s complex, it’s haunting. It is a glorious tale of human lives destroyed.

Back to Henry VIII

Henry VIII was presented in the Jentes Family Auditorium.