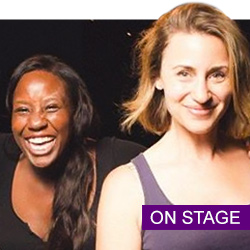 An all-woman cast takes on The Taming of the Shrew

This fall, Artistic Director Barbara Gaines stages Shakespeare’s comedy of The Taming of the Shrew, framed as a performance by a troupe of Suffragettes on the eve of the passing of the Nineteenth Amendment. It features Chicago Shakespeare’s first ever all-woman cast—setting up a witty and thought-provoking debate on politics, power, and love. “There is a supreme power in reclaiming this story to be told by women, particularly now,” Gaines notes. “Looking at this play through a woman’s eyes brings the play’s themes into sharp focus with wit, wisdom, and humor, and sheds new light on Shakespeare’s characterizations of both men and women, and their relationships. These women are wickedly smart, and strong—and they will not be tamed.” The Taming of the Shrew launches Chicago Shakespeare’s 2017/18 Season in the Courtyard Theater on September 16. 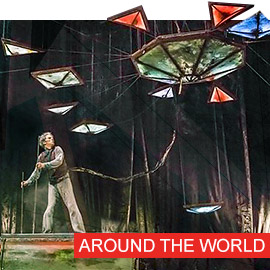 The 2017/18 Season brings companies from around the globe to Chicago as part of CST’s World’s Stage Series. Opening The Yard this fall is the Chicago premiere of The Toad Knew (September 19-23) by France’s unparalleled creative genius, James Thierrée. Next, CST hosts the largest production of the inaugural Chicago International Latino Theater Festival: Amarillo (October 17-29), crafted by one of Mexico’s most celebrated theater ensembles, Teatro Línea de Sombra. Closing out the season is Samuel Beckett’s masterpiece Waiting for Godot in Spring 2018 (May 23–June 3), presented by Ireland’s Druid Theatre and staged by Tony Award-winning director Garry Hynes. Don’t miss your opportunity to discover these incredible visiting artists while they’re here at Chicago Shakespeare—tickets for these limited engagements are on sale now. 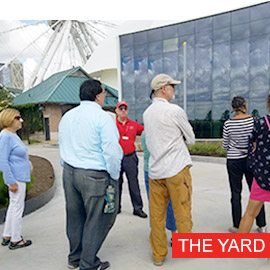 "The Yard is a true example of adaptive re-use"

Just in time for the 2017 Chicago Architecture Biennial, the renowned Chicago Architecture Foundation (CAF) is preparing their new tour of Chicago Shakespeare’s expanded three-theater campus and the newly reimagined Navy Pier. During the warmer months, CAF tour guides detail Daniel Burnham’s plan for Navy Pier and its transformative 100-year history. Throughout the year, visiting tourists and residents alike can enjoy a tour of Chicago Shakespeare Theater’s campus. Guests receive an exclusive look of the inner-workings of our original facility built in 1999, and will discover the theatrical and architectural innovation that went into our newest addition, The Yard at Chicago Shakespeare. Highlights include how repurposing the former Skyline Stage’s tent saved millions of dollars in redevelopment and demolition costs, and the science behind how a 35,000-ton seating tower can be easily moved by just three people. 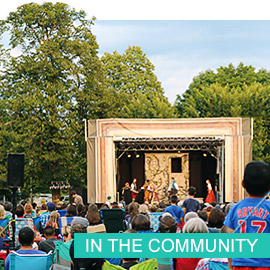 This summer, over 30,000 Chicagoans enjoyed free performances of Romeo and Juliet through the sixth annual Chicago Shakespeare in the Parks tour. At each of the 18 tour locations, a specially equipped truck rolled into the park, a stage unfolded, and a company of professional actors shared Shakespeare’s story of star-crossed lovers, with families and neighbors of all ages. Hundreds of young performers showcased their talents in our Green Shows—the “opening act” prior to the play. Over 140 neighborhood teens across the city joined our outreach and front of house teams to activate each community and to welcome Shakespeare into their local parks. Since the inception of the Chicago Shakespeare in the Parks program, more than 130,000 Chicagoans have taken advantage of free performances in their communities. 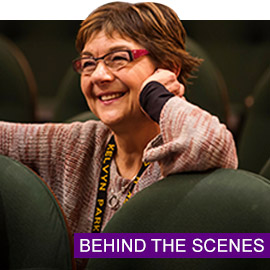 A Quarter-Century of Service to Students and Teachers

Chicago Shakespeare is proud to acknowledge Marilyn J. Halperin’s twenty-five years at the helm of our extensive education and audience enrichment initiatives as Director of Education and Communications, Ray and Judy McCaskey Endowed Chair. Joining our founding leadership team in the company’s early days, Ms. Halperin was tasked with launching an education program that would help make Shakespeare’s work accessible, and achievable, for all. Under her guidance, the Theater's student and teacher initiatives have evolved into one of the most respected arts-in-education programs in the country. Her work has supported literacy and creativity for generations of students, totaling nearly 2 million during her tenure. In August, Ms. Halperin was honored at a celebration with teachers, former students, scholars, artists, and her colleagues who paid tribute to her wide-ranging impact to the field.