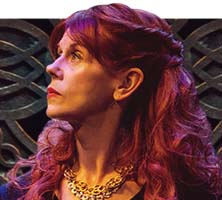 Firmly established as one of the most successful of all National Theatre of Scotland productions, this stirring sequel to Macbeth was originally commissioned by the Royal Shakespeare Company. It may come as a surprise to many that Shakespeare’s story strays far from historical accounts. The original Lady Macbeth did not die—she was wife to three kings, and queen in her own right. When the English commander Siward arrives to unite Scotland by installing Malcom on the throne, she goes to extraordinary lengths to protect the realm for her son, the rightful heir. During the rehearsal process, director Roxana Silbert and lead actress Siobhan Redmond shared their thoughts on this lively, vital examination of power. 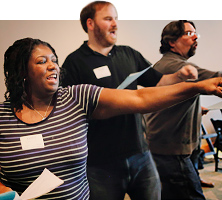 The cornerstone of CST’s education efforts resides in strategically supporting the work of English teachers in schools across our city and the country. Through our free Teacher Workshops, educators learn drama-based strategies to authentically engage students with Shakespeare. CST collaborates with leading scholars and artists to help teachers combine active storytelling with theater skills like visualization and imagination—shaping the classroom experience for hundreds of students in their schools, year after year. 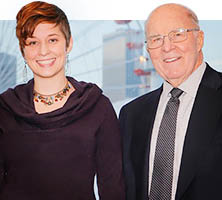 In January, CST staff and artists gathered to honor Assistant Properties Master Cass Westover with the 13th annual Hurckes Award for Artisans and Technicians. Created through the generosity of longtime friends of the Theater, Dick and Lou Hurckes, the award is dedicated to supporting and recognizing a member of the production department whose devoted and inspired work particularly exemplifies the very best of Chicago Shakespeare Theater. 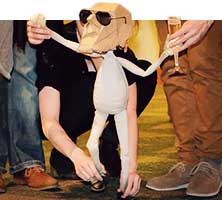 A City-wide Celebration of Puppetry

Last month, Chicago Shakespeare played host to the inaugural Chicago International Puppet Theater Festival, presenting the return of The Table from London-based artistic collective Blind Summit. After the opening night performance, elected officials, civic leaders, and artists from across Chicago and around the world gathered in CST’s Skyline Room to honor the city’s collective efforts. CST was among fourteen cultural organizations that helped bring the festival to life through astounding performances, hands-on workshops and a day-long symposium.