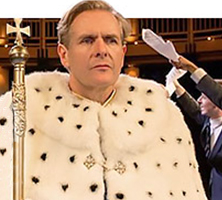 Garnering such acclaim as a four-star review in the Chicago Tribune and thunderous applause following each performance, this thoroughly British political saga is finding a special resonance with American audiences. The Chicago Sun-Times declares it “wildly imaginative, wholly entertaining... and a fascinating complement to the current political scene.” Set in the imagined near future as Prince Charles assumes the British crown after the death of Queen Elizabeth, the upheaval that follows uncannily echoes the unpredictability of today’s political landscape. Playing now through January 15, Downton Abbey favorite Robert Bathurst portrays the title role of the monarch who must artfully navigate the political and social complexities of modern-day England.

WATCH: Preview the action on stage 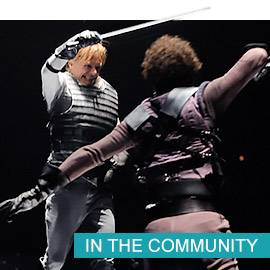 Shakespeare and the Citizen Soldier

Filmed at Pritzker Military Museum & Library and hosted by President and CEO Kenneth Clarke, this four-part video series engages members of the armed forces around the world by sharing insightful interviews with military personnel, war historians and weaponry experts, alongside dynamic discussions and performances of Shakespeare’s work with theater artists and scholars. The Bard’s canon has shaped modern views of war and warfare, and the Museum & Library has proudly served as a lead partner for Shakespeare 400 Chicago. The final live taping is coming up on December 12, in which Chicago Shakespeare fight director Matt Hawkins will discuss the historical use of specific weaponry, approaches to Shakespeare’s text, and trends in film and stage combat. A live demonstration of stage combat will be followed by a question-and-answer session. 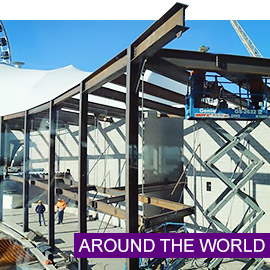 World-class, international partners behind The Yard

Just outside our front doors, the crescent shape of The Yard at Chicago Shakespeare’s new lobby is taking shape, connecting this new performance venue to our existing two theaters, creating one expanded campus. The award-winning, UK-based theater and acoustics consultancy firm Charcoalblue and Chicago-based Adrian Smith + Gordon Gill Architecture have conceived a radically new performance arena for our third theater, scheduled to open in 2017. Mobile audience “towers,” which stand as tall as a city bus on its end, can be rearranged to suit a variety of playing spaces, seating 150 to 850 patrons. Quebec-based Show Canada, known for their work with Cirque du Soleil, is designing these first-of-their-kind towers. Explore the construction site with Executive Director Criss Henderson in this Builtworlds’ Project Innovation episode.

WATCH: Building the theater of tomorrow 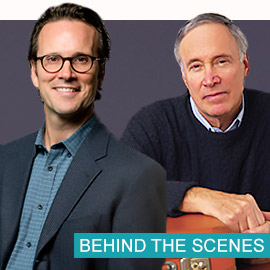 A world premiere based on a true story

Before Artistic Director Barbara Gaines’ production of The Book of Joseph makes its debut in late January, the Illinois Holocaust Museum and Education Center is hosting a “page-to-stage” event on January 26, featuring Rich Hollander, whose published collection of family letters inspired the production, and CST Creative Producer Rick Boynton. The two will discuss the artistic process behind this thrilling new work that centers on three generations of the Hollander family—from Joseph Hollander in 1940s Warsaw, and his family who was hesitant to leave despite warning signs of the pending Holocaust, to a modern-day Rich and Craig Hollander (Joseph’s son and grandson), who must come to terms with emerging details about their relatives’ storied pasts. The resulting dramatization reveals a compelling journey about the primal need to understand those who came before, and serves as a prime example of the Theater’s ongoing commitment to developing new works. 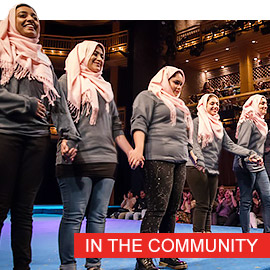 300 students declare "We on this space!"

Chicago Shakespeare Theater’s main stage was filled to capacity with students from area high schools, performing, cheering, dancing and geeking out—over Shakespeare. The Battle of the Bard “Final Bout” marked the culmination of countless hours of rehearsal time, Saturday workshops and preliminary bouts for this high school Shakespeare slam. Nine teams advanced to the Finals—performing to a theater filled with their Battle of the Bard peers, here to support the other students’ teams. The rock concert atmosphere of the night was fueled by DJ “Iamb” Patrick Budde and emcees Sarah Ruggles and Donovan Diaz, but was ignited by the exuberance of the students, reveling in the words of Shakespeare and the boundless creativity on our stage that evening. Chicago Shakespeare Theater partnered with Chicago Youth Shakespeare to create this one-of-a-kind program that reached schools from the Belmont-Cragin neighborhood on the city’s northwest side to the South Chicago neighborhood, and from Aurora to Waukegan in the suburbs..

WATCH: Students bond over the Bard