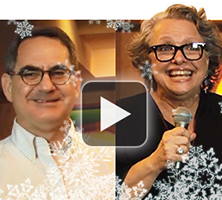 When an ensemble of gifted actors is given the opportunity to let loose with a script penned by one of the most celebrated playwrights in America today, the result is a showcase of masterful comic timing. The incomparable playwright David Ives’ work is smart, funny, raucous—truly a singular voice of the American theater. “Gaiety ran in his veins as his birthright” is how twenty-first century playwright David Ives describes the eighteenth century French playwright whose play inspired his The Heir Apparent. It’s hard to tell who is having more fun—the actors or the audience members—but either way, that joie de vivre will continue to permeate the Courtyard Theater until the final performance on January 17. 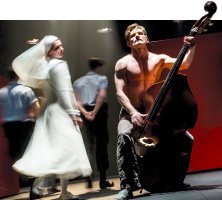 Four Internation Shows Kick Off a Year of Shakespeare

January 2016 marks the beginning of Shakespeare 400 Chicago, the largest global celebration of the playwright whose words have moved the world for four centuries. We are reaching across oceans to draw the world’s most visionary artists to the shores of this global city. This winter, Chicago audiences can see Measure for Measure from Russia, performed by Cheek by Jowl and Moscow Drama Pushkin Theatre; King Lear from Belarus Free Theatre; Sancho: An Act of Remembrance, written by and starring Royal Shakespeare Company actor Paterson Joseph; and a rock-and-roll take on Twelfth Night from the UK’s Filter Theatre.

EXPLORE: Up and Coming 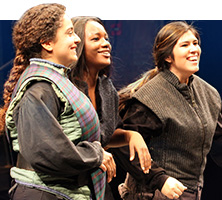 Students and Teachers Learning from One Another

CPS Shakespeare!, made possible by Eric’s Tazmanian Angel Fund, celebrates the education process at its best: creative, engaged and collaborative. Now in its 10th year, the program unites a citywide ensemble of Chicago Public School students and teachers who work side-by-side with professional CST artists to create an original adaptation of one of Shakespeare’s plays. Taking on the greatest poet in the English language and making his words their own, the participants have come to discover their own voices, nurtured by an unparalleled process of exploration, rigor, learning, empathy and teamwork. 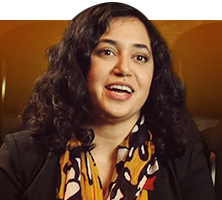 A graduate of DePaul University/Chicago Shakespeare Theater’s Arts Leadership Fellowship and Master of Fine Arts program, Shakespeare 400 Chicago Festival Producer Doreen Sayegh has been working closely with CST Artistic Director Barbara Gaines and Executive Director Criss Henderson to curate programs that capture the audacious spirit of Shakespeare. Doreen has traveled around the world finding distinctive international artists to join the celebration, and throughout our city scouting unique opportunities for Chicago’s cultural institutions to unite over a common theme.