From the Director: Early Insights into Cyrano de Bergerac 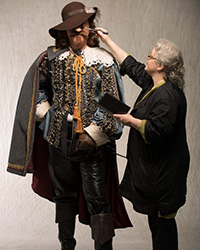 Chicago Shakespeare begins its 2013/14 Subscription Season with the Theater’s first-ever production of Edmond Rostand’s Cyrano de Bergerac. Early in the artistic process, CST Director of Education Marilyn Halperin sat down with Director Penny Metropulous to share her thoughts about the play.

MH: Cyrano de Bergerac has long been a favorite of audiences—why is that?

PM: When Barbara mentioned it to me, I didn’t hesitate, not even one second. I just said “yes.” Audience members—myself included—love a good story. Where characters that we’re supposed to love are unbelievably loveable. And the ones we’re not supposed to like—well, you really want them not to win.

The play is filled with great romance, but also naturalism and high-style comedy. At the time Rostand was writing Cyrano, church and state were dictating the morality of the culture. Yet Rostand presents this man, Cyrano, who simply speaks the truth. The bravery that takes—we just don’t see that a lot. When we do, our initial response might be, “What a fool,” but somewhere deep inside, we also aspire to be that “fool.” I wish I were that honest. I wish I had that witty reply on the tip of my tongue at just the right moment. I wish I had the courage to stand up for what I believe and not care about the consequences.

MH: It’s interesting thinking about this character who is so brave and yet so frightened.

PM: In Cyrano, we have somebody to look up to and see as a hero. Society treasures, admires and rewards beauty—and always has. Yet here’s a man whose soul couldn’t be more beautiful, but due to his outward appearance, he’s developed defenses. Would he be the same person if he didn’t look like that? Hard to know.

MH: You most recently worked with Harry Groener on our stage for The Madness of George III. Did you always have him in mind for this play?

PM: Like Cyrano, Harry is a man with great breadth of spirit… a deep thinker with a wonderful, generous heart. They are both true entertainers for whom the objective isn’t to entertain. It’s second nature for them to give without expecting something in return. Harry has that beautiful balance of self-confidence and humility, which is so important to this role. You need somebody who understands what a fatal flaw can be. Cyrano is a romantic, but he must also be a soldier. You’re striving to get all of that in one person—and in Harry, we do.

MH: Can you talk about the role of language in this play?

PM: I can’t quote this play as I can Shakespeare, but I know it quite well. When I was reading it again, I was reminded of just how beautiful its language is. The balcony scene and that final scene…they are simply beyond the pale. And it’s such a tour de force for an actor, doing this from beginning to end. It never stops. It’s almost worse than Hamlet—you can’t believe how much Cyrano talks! Rostand—and Shakespeare for that matter—may be beautiful on the page, but when the text is well spoken, well acted, there’s really nothing like it. In our lives, how many times do we say, “I love you”? But when we hear someone articulate it, our hearts on breath, it’s undeniable. It makes the invisible visible.

Join the Bard Circle, CST’S premier giving society, and your gift will be doubled by the Bard Circle Challenge Grant! Gain access to VIP ticketing, interval services, and behind-the-scenes events!

Chicago Shakespeare
in the Parks
The Comedy of Errors
July 26–August 25, 2013