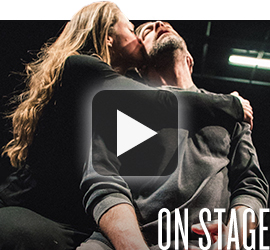 Next Wednesday, we throw open the doors of The Yard at Chicago Shakespeare and welcome audiences to a spellbinding Macbeth. Magic, explains co-director Teller, "has a strange quality of making you see what isn’t there"—precisely why co-director Aaron Posner and he chose to weave it throughout the play to build the haunting world of this centuries-old psychological thriller. With Macbeth, Posner and Teller make a long-anticipated return to Chicago Shakespeare following their sold-out run of a magic-infused production, The Tempest, in 2015. Breathing life into the witches, visions, and ghosts in Shakespeare’s text, the unexpected theatrical elements in the pair’s latest collaboration will pull audiences into the hallucinatory reality engulfing the titular couple. Everything from the costume, scenic, and lighting elements to its eerie original soundscape has been designed to let audiences enter the minds of the Macbeths—and is in service to the precise choreography that magic requires.

Hear from the cast > 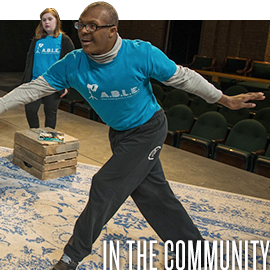 Artists Breaking Limits and Expectations (A.B.L.E.) continues its partnership with Chicago Shakespeare through a production of Edmond Rostand’s Cyrano de Bergerac in The Yard on Thursday, May 17. This inspiring ensemble of young actors with cognitive and developmental differences work together with A.B.L.E. teaching artists and support each other to create the final performance piece. Before casting roles, which multiple actors share, each ensemble member has the opportunity to inhabit many of Rostand’s characters, exploring the play from different perspectives. This adaptation stays true to the classic story, but also features pop-rock musical numbers and swordfight sequences devised and inspired by the ensemble. A.B.L.E.’s creative process empowers young actors to develop the confidence to share who they are, discover their own unique voices, and celebrate their ever-expanding abilities. 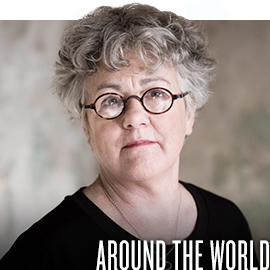 This spring, we welcome back director Garry Hynes, who made history as the first woman to win the Tony Award for Best Direction of a Play for her 1998 production of Martin McDonagh’s Beauty Queen of Leenane. With Ireland’s Druid theater company, she will present her critically acclaimed staging of Beckett's masterpiece Waiting for Godot in a limited 2-week engagement, May 23–June 3. Druid, which she co-founded in 1975 in Galway to make professional theater in Ireland accessible outside of Dublin, has since garnered international renown for productions that champion Irish dramatists. Waiting for Godot is an affecting, funny tragicomedy, which Hynes says is centered on "the loneliness of the individual trying to make sense of the world." Through the latest of Chicago Shakespeare’s WorldStage presentations, Chicagoans can now join audiences from cities across the globe in witnessing Hynes’ stunning work.

Get a sneak peek > 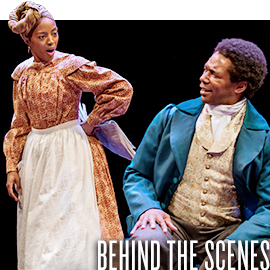 Since 2009, under the guidance of Chicago Shakespeare’s Artistic Associate/Casting Director Bob Mason, more than 400 actors have taken CST’s Comedy and First Folio training courses. These five- and six-week classes immerse artists in rigorous analysis of Shakespeare’s text, providing them with techniques that have been the hallmark of Barbara Gaines’ work in Shakespeare and the Theater’s successful exploration of the canon. The Folio and Shakespearean Comedy classes are led by three remarkable classical actors who frequent Chicago Shakespeare’s stages—Kevin Gudahl, Ross Lehman, and Larry Yando. Of the numerous Chicago actors trained by these masters in Folio techniques, three are featured in Macbeth, fifteen others have been featured throughout this season, and one is now making his Broadway debut this spring in Harry Potter and the Cursed Child.